South Sri Lanka is the most-visited corner of the Teardrop of India. Rolling from the immersive Portuguese colonial city of Galle all the way to the wild eastern coastline and the leopard-stalked Yala National Park, it’s a region of the world that rarely fails to impress. 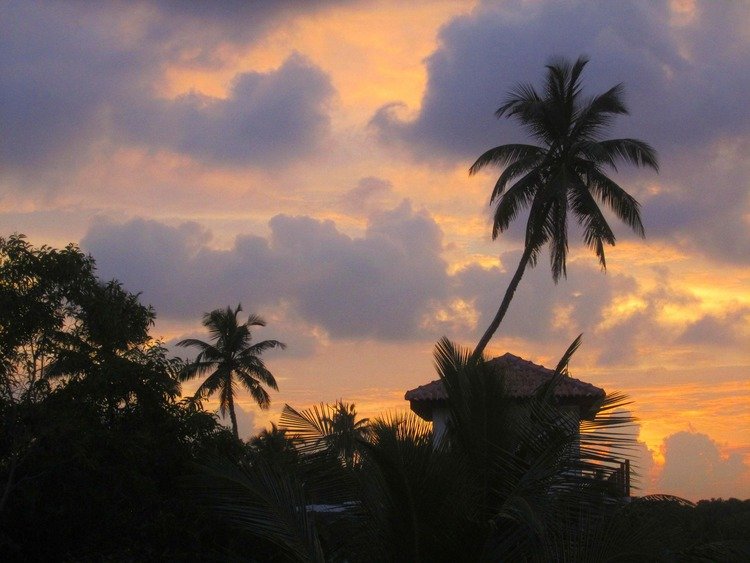 This guide will go from the mist-haloed highlands of Ella to the wave-bashed coastline. It’s aim? To seek out the 10 top things you simply can’t miss in South Sri Lanka. It’ll reveal the beaches in Sri Lanka with epic Sri Lankan surf breaks, wild hikes to craggy rocks overlooking the tea fields, and nature reserves where you can spot some of Asia’s most elusive big-cat predators. Are you traveling with the kids? See this article on exploring Sri Lanka with children.

I also made a map marking all the places in Sri Lanka to visit included in this article. You can find this map here or below in the Map of Must See Attractions in Southern Sri Lanka.

Ella Rock is the best hike in the Ella area. It looms like something out of The Lion King above the trekking capital of the Central Highlands of Sri Lanka, spiking above the jungles and lush plantations like the finger of a sleeping giant. So it is clear that this could not be left out among the best places to visit in Sri Lanka.

The climb up is moderately difficult. I’d recommend heading off as early as you can to avoid the rains that usually sweep up the valley by 2pm. Start on the path adjacent to the railway line before veering off through tea fields over a muddy river.

From there, the route bends upwards and into the mountains. After about two hours’ hiking, you’ll reach the top, where a smiling fellow doles out fresh passionfruit juice and the view is simply stunning. 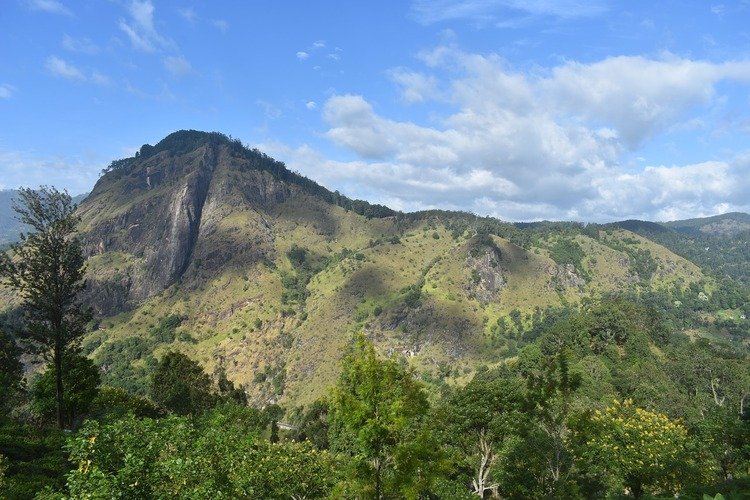 Hiriketiya Beach is a secluded horseshoe bay on the southern side of Sri Lanka. It’s nowhere near as popular as places like Weligama or Mirissa (at least not yet!). There’s a small beach town just behind the sand that’s still riddled with muddy tuk-tuk tracks and ramshackle bungalows shaded by high palms.

The main reason people come is for the surf. Hiriketiya Beach has some of the best waves in this region of the “old Ceylon.” They’re especially good for beginners and intermediates, with one beach break that’s super mellow joining up with a harder reef on the east side of the bay. There are now some fantastic homestays and boutique surf lodges within walking distance of the swells. 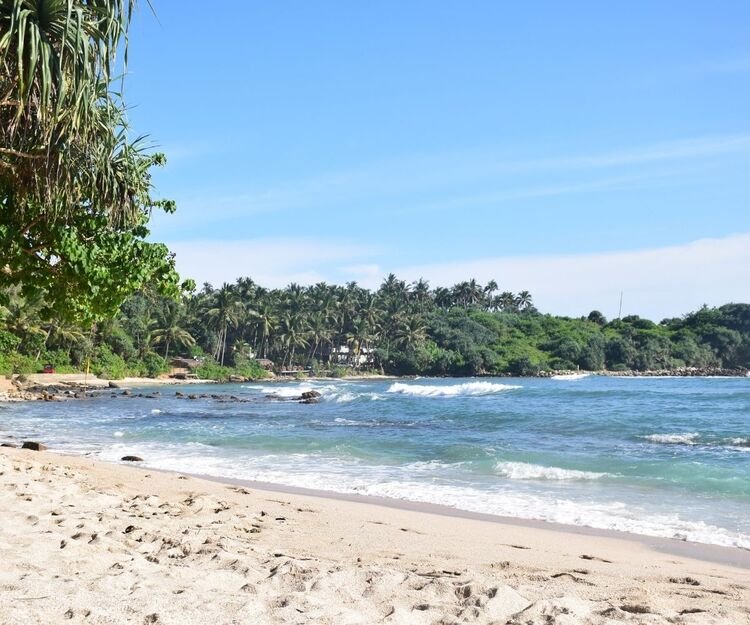 The Lunugamvehera National Park is the first dash of flatland that comes after the Central Highlands give way to the dry zone of south Sri Lanka. That means it’s the perfect place to go a-searching for stalking leopards, which are the piece de resistance of safaris in these parts.

You’ll need to leave early to catch the wilderness before the rains of the sun haze set in. Game drives usually cost around $60 and last a few hours. I’m not going to lie: Seeing a leopard will be the luck of the draw. However, there’s still Sri Lankan elephants, wild buffalos, sambar deer, sloth bears – the list goes on! 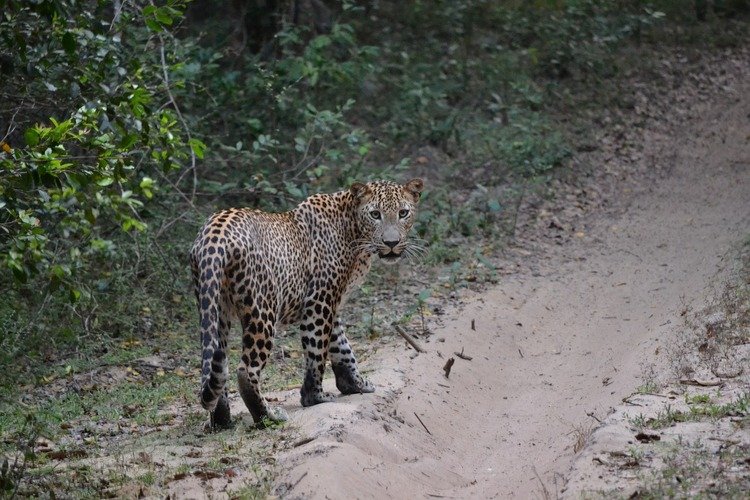 Fort is the most immersive part of the city of Galle, which is considered by many to be the gateway to the south-west coast of Sri Lanka. Built on a headland out in the Indian Ocean, it was raised by the Portuguese way back in the 16th century. You can still see the old bulwarks and fortifications they built then.

Today, the area has been taken over by cool roastery cafés and art galleries. It’s a pleasure to get lost in. Head down Pedlar Street to find artisan ice-cream sellers and vegan cookhouses scented by coconut curries. Choose Rampart Street to glimpse whitewashed lighthouses and colonial palaces. Just be sure to charge the camera before you start! 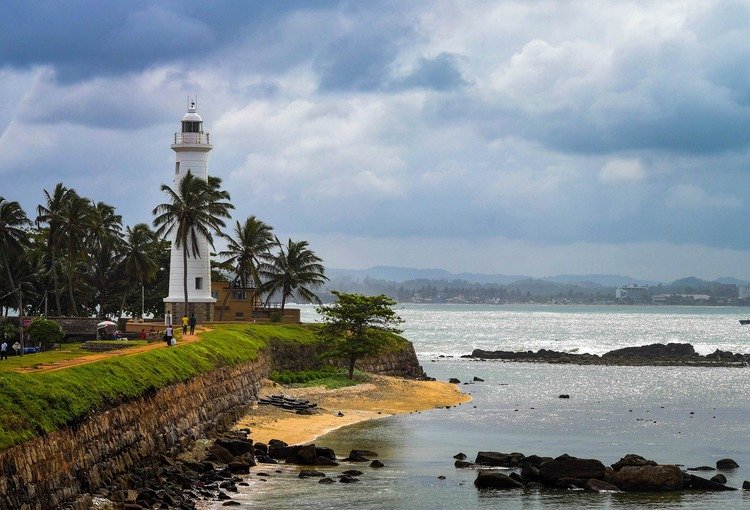 The Yala National Park is the most-visited reserve on the whole of the Sri Lanka south coast. It’s known unofficially as “leopard country,” because there’s a higher density of those elegant feline hunters here than anywhere else on the planet (yep – ANYWHERE else on the planet!). The best time to come if you’re keen to spot them is in the dry season, which runs between June and August each year on this part of the island.

The main road for game drivers is the Buttala-Kataragama Road. It’s something of a fauna obstacle course – elephants are often the culprits, but they’re a joy to watch as they galumph from side to side. The Yala also hosts all manner of other exotic creatures, from Toque macaques, to flying snakes, to painted-lip lizards. It’s a must for nature buffs. 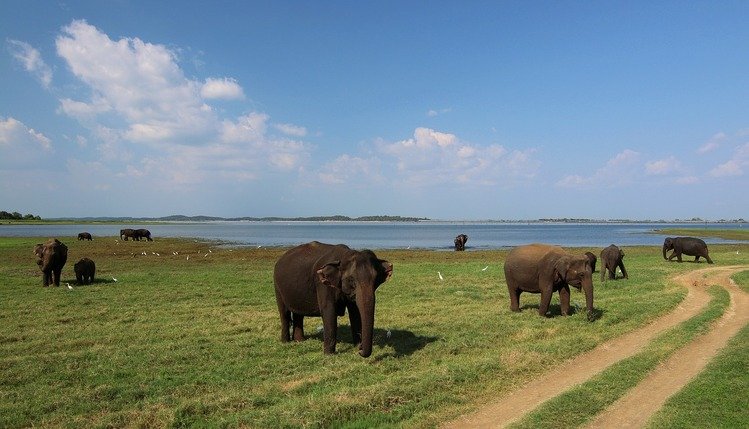 Mirissa is the hammock-swinging capital of good-time living on the Sri Lankan south coast. I won’t pretend it’s a place to leave the comfort zone and push the adrenaline up. It’s not really. Instead, it’s the perfect spot for recharging the batteries with some good old R&R.

That’s mainly down to the fact that the town fronts one seriously lovely beach of gold powder, and there’s another stunning inlet (known as Secret Beach, but it’s not so secret) that’s even nicer.

Spend your days on those and then get spruced up for a night in the beach bars when the sun sets. They’ve got some enticing happy hour deals that go until 9pm. Then, things get off the hook, with fire breathers and DJ parties raging until the early hours. 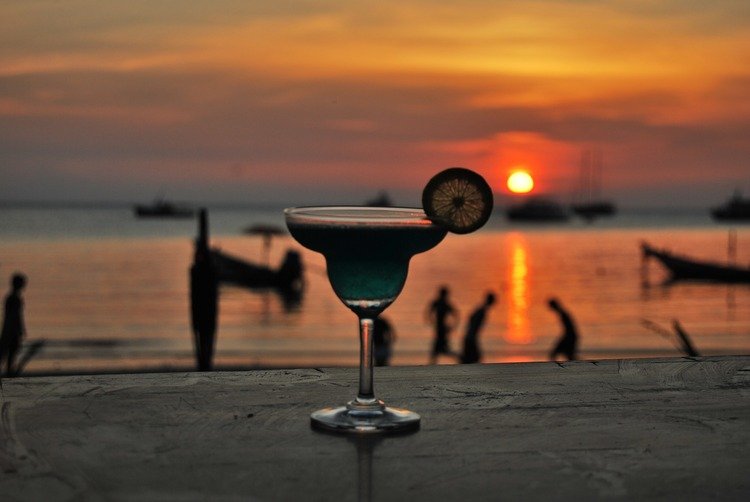 7. Learn to surf in Weligama

Calling all beginner surfers – Weligama is the place to go to hunt your first waves in Sri Lanka. The town ain’t pretty (it’s strung out along the main Matara Road, which is always pulsing with tuk-tuks and traffic). Ignore that, though, because Weligama Bay is one huge scythe of sand where you’ll find fantastic conditions for learning the art of paddling, popping and standing up.

There are now countless hostels and surf camps on the streets just behind the bay. They offer affordable accommodation, surf lesson, and rental packages. You’ll also get to enjoy plenty of uber-cool surf cafés and eateries, like the Ceylon Sliders artisan burger joint or Rise, which I’d say is the finest pizza on the whole island (big words, I know!). 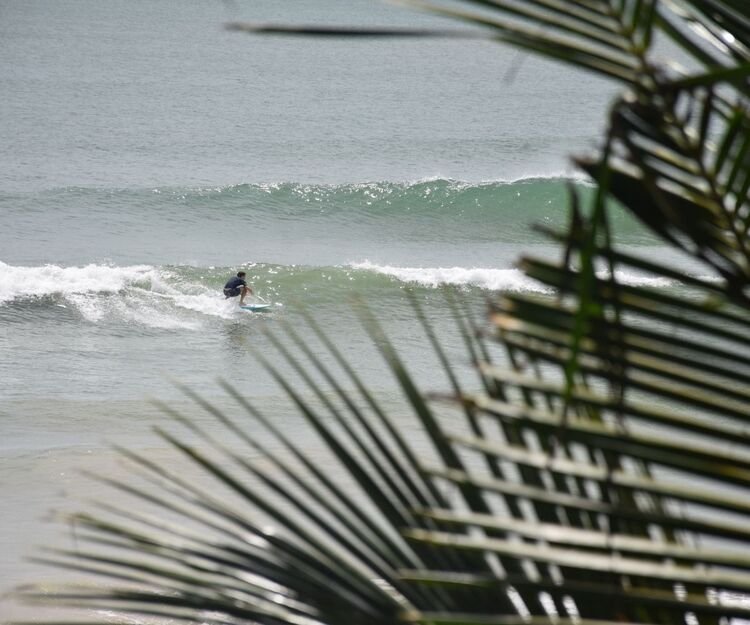 There’s probably no more popular a photo spot than the plinths above the Nine Arch Bridge, just north of little Ella, the hiking hub of the Central Highlands. Built by the British in the early 20th century to connect up the railways in this rugged part of the country, it’s now considered a stunning example of colonial-era architecture.

I think the best place to catch a shot and wait for the trains to come is Nisee Juice Bar. It’s high above the Nine Arch Bridge and has an open front for sweeping views of the lush valley below. Also, don’t go riding a tuk-tuk from Ella town to reach the bridge. Much better is the hike through the beech forests, which undulates up small hills and across grassy meadows to take you to the right spot. 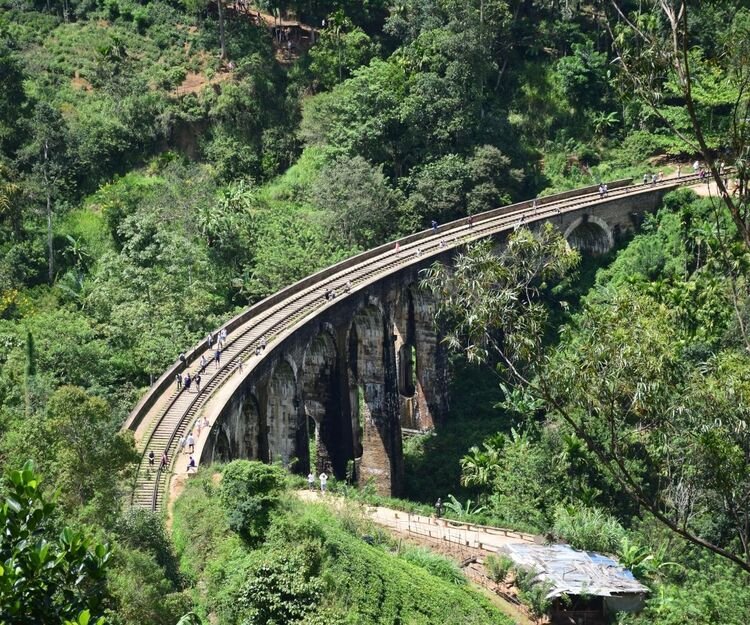 I couldn’t believe my eyes when I first laid my footprints on Dickwella Beach. It was sun-bleached morning, and the waves of the Indian Ocean were lightly lapping against the shore. The sands shone a glittering gold, as stoop coconut palms dipped down from the hotel gardens to meet the whitewash. But…there was hardly another soul in sight.

Dickwella Beach awaits right in front of the town of Dickwella, which is a major transport hub on the south shore. It’s about 10 minutes’ walk from aforementioned Hiriketiya and comes with a dotting of relaxed, oceanfront accommodations.

I could spend hours there soaking up the rays and splashing in the shallows – there’s no surf, it’s a touch too calm. For brunch, be sure to make for Verse Collective, a super-cool hipster skate café on the east side of the bay. 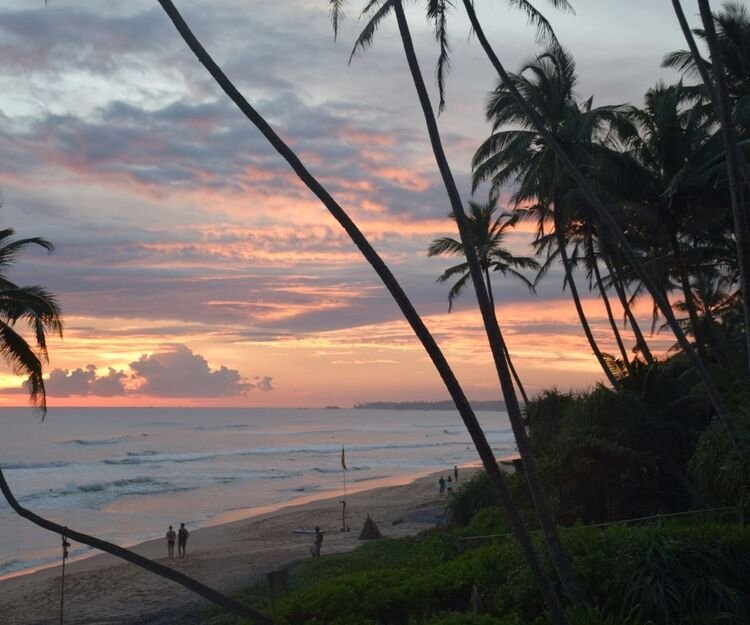 10. Pull on the hiking boots in the Horton Plains National Park

Of all the hiking that’s on offer in Sri Lanka, it’s probably the Horton Plains National Park that comes up trumps. The region is wild and altitudinous, but can be accessed in a couple of hours from Ella via Haputale. Trekkers will want to start early – those bothersome rains come like clockwork in the afternoon.

Also, be sure to slather on the bug spray, pack plenty of sunscreen, and drink oodles of water, because it’s not a walk in the park.

The most popular hike to do in the Horton Plains is the one to the so-called World’s End. It’s a 9km loop that starts on steep, rocky tracks through pockets of gnarled rhododendron trees. The aim is the lookout at World’s End itself. It comes around halfway into the walk, when it reveals a sheer-cut cliff face that drops a whopping 4,000 feet into the valley below. It’s not one for those who suffer from vertigo!

If you are planning to venture into Horton Plains National Park, be sure to check if your international health insurance covers hiking accidents, and remember that there are some companies specializing in travel insurance for extreme sports and adventure activities that may be useful depending on your travel itinerary. 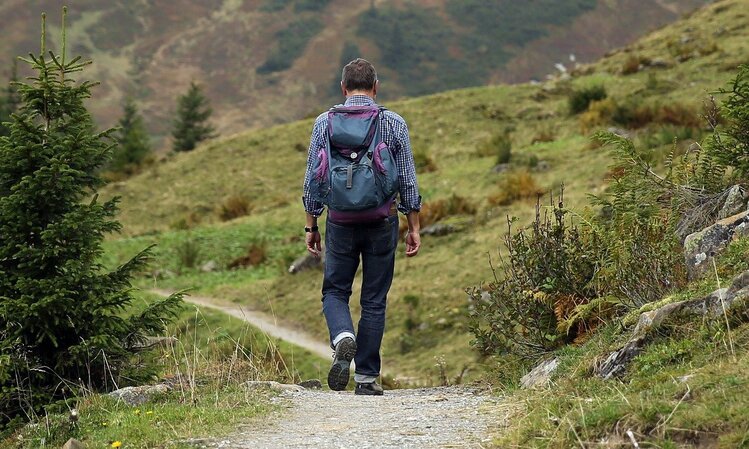 So that you don’t get lost, I created a map that shows where each attraction on that list is. That way, you can arrange your itinerary and plan in detail transport and accommodation issues taking into account the location of the best attractions in Southern Sri Lanka (just click on the map below to zoom in).

So that you don’t forget, the best attractions to visit in southern Sri Lanka are:

BIO: Joe is the co-founder of the global surf and travel site The Surf Atlas. He’s traveled Asia, Central America, Europe and New Zealand in search of some of the world’s top breaks. Aside from surfing, he loves to hike and hunt for empty beaches far away from the crowds. His favourite destinations include the south shore of Sri Lanka, the Italian Dolomites, Wales and the Mexican Pacific. You can follow The Surf Atlas on Facebook and Pinterest.